In Memory of Sarah Kirsch 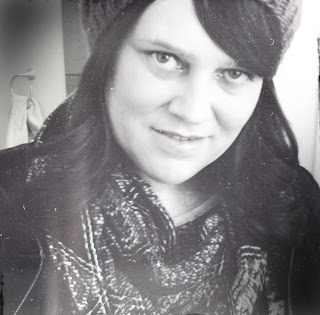 Sarah Kirsch (long-time fixture of the Bay Area hardcore punk community, formerly known as Mike Kirsch, and member of the bands Fuel, Sawhorse, Pinhead Gunpowder, Navio Forge, John Henry West, Sixteen Bullets, Torches To Rome, Bread and Circuits, Please Inform The Captain This Is A Hijack, Baader Brains, and Mothercountry Motherfuckers) passed away last week after a long and difficult battle with Fanconi Anemia. She was someone so fundamental in shaping the way I have grown to experience the world, how to move through it and how best to use my expressive energy in confronting it, that it's difficult to imagine a world without her.

Here are pieces on her passing in the SF Weekly and MaximumRockNRoll.

Growing up in Arkansas in the early 1990's, my friends and I spent countless hours skateboarding and trampolining to the Fuel LP while writing and drawing our early comics efforts. That LP remains my ALL-TIME favorite album. When I sent word to one of those friends, Nathan Wilson, about her passing, I urged a listen to the album in her honor. He remarked with such simplicity and truth, "She really did create a sound that is immediately accessible whenever I think about it (even 21 years later), and probably always will be." He didn't even need to actually play the record-- the sound was so pervasive, so deeply-rooted in every fiber of our beings, that he only needed to find the space in his heart where it (and she) resides.


Sarah and I finally met at a Seein Red/ Yaphet Kotto/ Deathreat show in Little Rock in 1998, and built a friendship in the year after that as we helped book shows for each other's bands, and embarked on a short leg of tour together (with Bread and Circuits, Former Members of Alfonsin, and Soophie Nun Squad). Especially in the reactionary-PC climate of the late '90's, this pairing seemed pretty weird and incompatible to most people, but it was apparent that Sarah "got" what Soophie was trying to do with our performances, and respected our creative vision with which we tried to intertwine levity, fantasy, politics, and human interaction. Likewise, Sarah's bands used a holistic approach to their work-- building up music, performance, packaging, text, and intention to convey something much more powerful than even the already incredibly passionate music. At times we'd be a bit nervous that we falsely represented ourselves as being apolitical or disconnected, especially in the presence of older punks who had a much more pointed and serious focus to their music, but Sarah would constantly put us at ease, shedding those pretensions, costuming up with us at shows and even tucking us all into bed in Memphis one night, singing us an ad-libbed Frampton-style lullabye while wailing away on her guitar with a head-mounted miner's light casting shadows across the room. I'll treasure that forever. 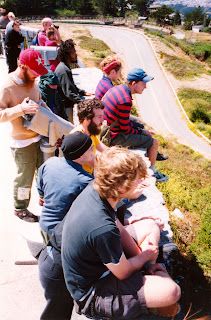 Sarah and her friends displayed hospitality and unrivaled generosity when Soophie embarked on our West Coast tours, showing up at her door with 12-14 people for entire weekends, at the time oblivious to how imposing our presence might've been-- she always made us feel right at home, well-fed, and ready to take in the sights and sounds of her lifelong home. 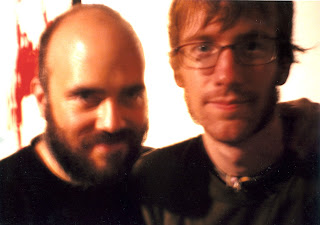 I feel so privileged to've been able to spend time and break bread with Sarah semi-regularly since then, to see her last band play on tour a few summers ago, and to spend as much time as possible with her in the hospital last February. 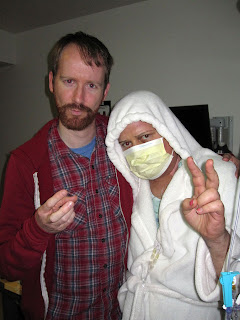 In a scene/community that generally eschews the notion of heroes, Sarah was probably the closest thing I've ever had to a hero throughout most of my life, and this was made all the more sweet and amazing as our friendship grew over these past 15 years.

I don't want to write anymore about this right now, so I'll just say this: Sarah, you are missed and loved by everyone whose life you've touched, and truly by everyone who knew you. You amaze me, and always will. I would not be who I am today without you.

I recommend these tracks to give a glimpse into her incredible musical vision:

Skinflutes-- "Rebel Run"
Fuel-- "Instrumental (2:52)", "Cue To You", and "For Lack Of Better Words (Shine)"
Sawhorse-- "One"
Pinhead Gunpowder-- "I Wanna" and "Hey Now"
Navio Forge-- "Weaponizing"
John Henry West-- "Avoiding"
Torches To Rome-- "Young Arsenal" and "Numbered Days"
Bread And Circuits-- "Statute Of Limitations" and "Bloodbath"
Colbom-- "Prisoner Of Work"
Please Inform The Captain This Is A Hijack-- "Postcards From The Future", "Transnational Vampire Killers", and "The Asymmetric Enemy"
Baader Brains-- "Fear Not The Lions" and "Vostok Welcoming Party"

Thank you, Nate. She was a hero to me too.